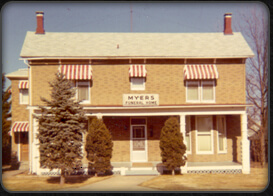 Myers Funeral Home was founded by the late, Howard Frank Myers. Howard was married to the late, Dorotha Dean “Dot” Lile Myers, and they were the parents of three children: Howard Kent Myers, Edward Brent Myers and Paula Jean Myers Vomund. Howard graduated from the College of Mortuary Science in St. Louis, on December 18, 1946 and became a licensed embalmer on February 2, 1948, after serving an apprenticeship with the Bram Funeral Home in Macon, Missouri. Howard came to Wellsville on March 1, 1958 as an assistant to Keeling B. Wells. After the death of K.B. Wells, in 1960, Howard and Dorotha purchased the Wells funeral home on June 17, 1960.

On February 26, 1972, Howard “Kent” Myers, Howard Frank Myers’, oldest son, graduated from the Kentucky School of Mortuary Science in Louisville, Kentucky. Kent married Sarah “Jane” Mullen Myers, and they had three children: Howard Jason Myers, Jill Ann Myers and Jennifer Aliece Myers. After Kent served a year apprenticeship with his father, he became a licensed funeral director and embalmer with the State of Missouri on June 12, 1973. Howard and Kent worked together for several years, until the unexpected death of Howard on January 10, 1982. After the death of Howard Myers, the funeral home was incorporated under the name of Myers Funeral Home, Inc. with a charter granted from the State of Missouri on August 16, 1982 with Howards three children, Kent, Eddie and Paula as owners. It was not until December 1, 1986 that Kent and his wife, Jane, became sole owners of Myers Funeral Home, Inc.

On August 26, 2006, Kent Myers, passed away at the age of 54, after losing his battle to cancer. The funeral homes continue to be owned and operated by his wife, Sarah “Jane” Myers.